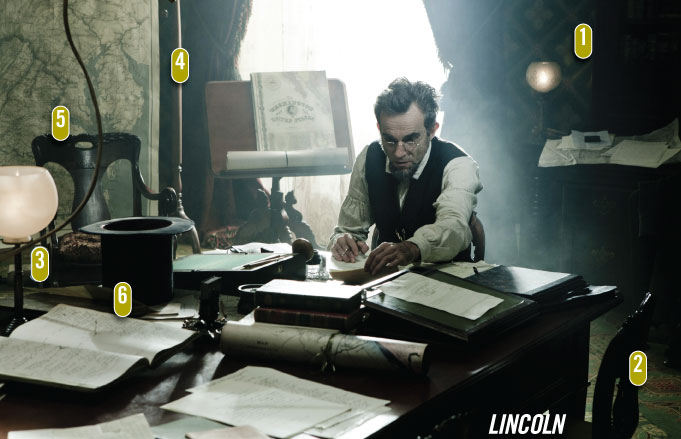 Diane Haithman is an AwardsLine contributor. This article appeared in the Feb. 13 issue of AwardsLine.

Veteran set decorator Jim Erickson, nominated with production designer Rick Carter for Steven Spielberg’s Lincoln, has a thing about authenticity. He once hunted down a collector of vintage candy wrappers to find just the right wrapper to reproduce for the movie Love Field (well, almost: He wanted a 1964 Butterfinger from Texas, but settled for a 1964 model found in Arkansas). Erickson took pleasure in creating authentic White House interiors because Lincoln was the first U.S. president whose life was well documented in photographs. Erickson talked to AwardsLine about the detailed work that went into re-creating Lincoln’s office.

1) Lincoln was shot in Virginia using many real-life historic sites, but the Lincoln office was re-created on a set using photos as the guide. “We scaled off the pattern of the wallpaper and had it all designed and silk-screened. We worked up a pattern that was as close as we could actually get without having a real piece of it in front of us,” Erickson says. Erickson was able to find Carter & Company, a Richmond business with a staff of four that provides wallpaper for museums and historic homes and could do reproductions at a reasonable price. “Silkscreen is how they did wallpaper back then. It can create metallics and glazes a computer can’t do. The computer can give you images, but not the texture.”

2) During her White House tenure, Laura Bush remodeled what is known as the Lincoln Bedroom “but was really his office,” Erickson explains. The First Lady had hired an East Coast design firm to weave an authentic carpet. “We just contacted them, and they made us a carpet. (Mrs. Bush) had used her own color scheme, and it was very tasteful, but we wanted to get back to the original.”

3) Erickson is often displeased with the lighting in period films because it’s anachronistically bright. So when cinematographer Janusz Kaminski (also nominated) arrived for his first meeting, Erickson, who had acquired a vintage gas light fixture, set it up and lit it in a dark room. “And I said, ‘Janusz, this is how much light a gas light gave back then.’ I like to think I influenced him in some way. He did a brilliant job.” The gas line for the lamp on Lincoln’s meeting table goes up to attach to a chandelier outside the frame of the image.

4) Even if the audience can’t see the details, all maps and documents are meticulous copies of the originals. While the average viewer might not notice when it’s done right, Erickson says, when something is not accurate, it jumps out like a neon light. Plus, the actors need authenticity to get into character. “When I first started out in film, prop people were famous for putting in gag props. That is so disrespectful to the actor to do that, it just indicates that you don’t take their work seriously. Even the minutes for these meetings people had that were in their portfolios were the actual minutes, because these minutes were documented so well.”

5) Erickson says he cringed at the idea of buying period antique furniture, expecting it to be too expensive. He figured reproductions would have to suffice. Instead, “I did really well because there was an antique auction every week in Richmond—Wednesday, I think—and it was like a prop house for me. Also this Victorian furniture is very out of fashion right now, so it was ridiculously cheap. I’d go there every week and buy a truckload.”

6) Erickson can’t take credit for the iconic stovepipe hat—talk to the costume department. But, he says, “I think all of us who are nominated should wear them to the Oscars.”