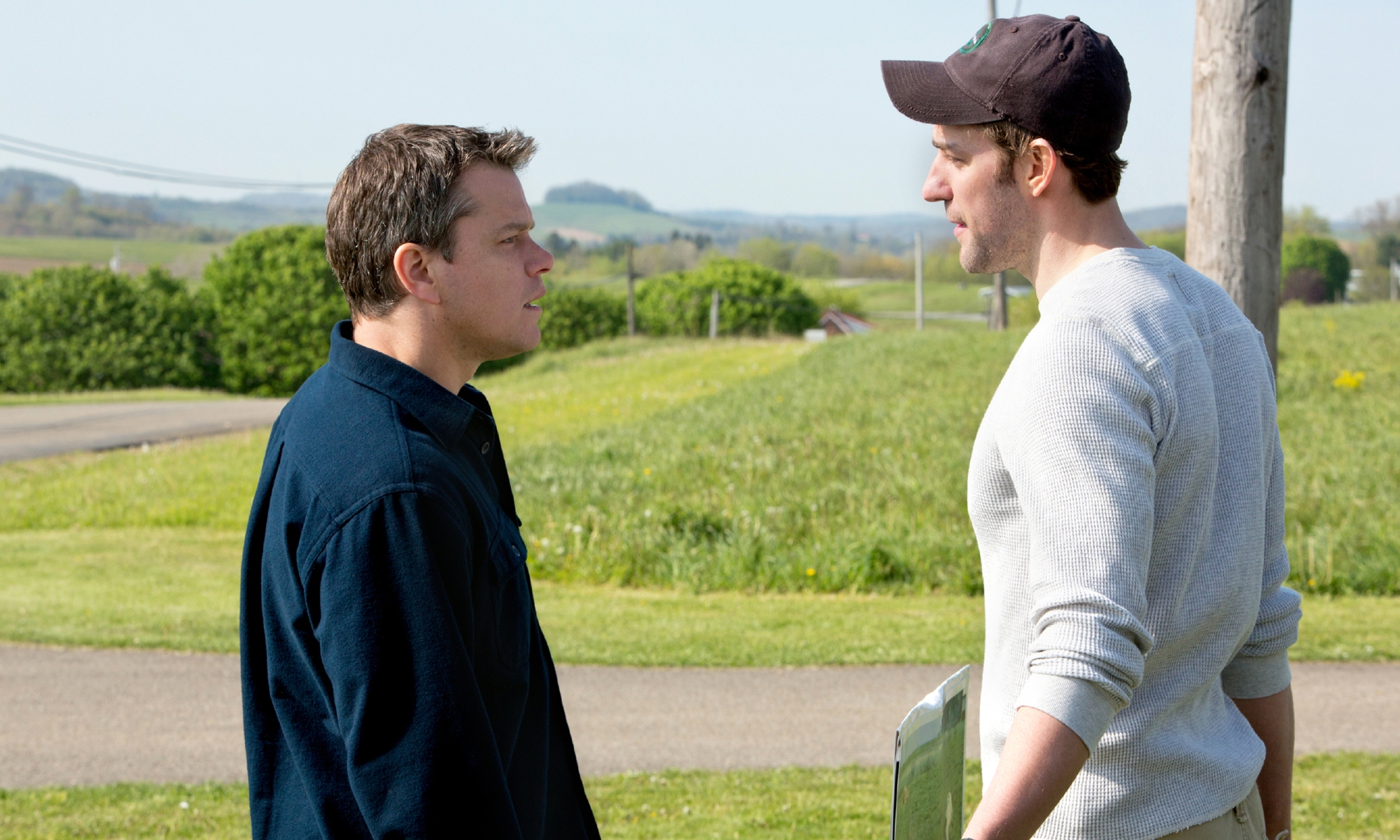 Ari Karpel is an AwardsLine contributor. This article appeared in the Dec. 19 issue of AwardsLine.

Matt Damon and John Krasinski are well aware that Promised Land is facing what Damon deems “an uphill climb.” The film, about a community confronting the rock-and-hard-place decision of whether to frack or not to frack—that is, whether to allow a major corporation to come in and drill for natural gas in exchange for millions of dollars and, potentially, the townspeople’s physical health—faces a marketing challenge that teeters on the same fine line Damon and Krasinski walked while writing its screenplay.

“It’s a minefield,” says Damon, mindful of the taint that can adhere to a movie thought of as “an issue movie.” “You can’t get too heavy-handed, and it can’t feel like it’s some polemic.”

And yet that hardly compares to the ups and downs he and Krasinski faced in getting the movie off the ground.

It all started with Krasinski, who wanted to write a screenplay about “some sort of abuse of power in…the green energy movement.” The actor, best known as Jim Halpert on The Office, had previously written and directed 2009’s Brief Interviews With Hideous Men and starred in Away We Go, written by Dave Eggers, who also consulted on the film. “I brought it to Dave because these are issues close to his heart, too,” Krasinski says. They hashed out characters and a story, set against the backdrop of the wind-farming industry. (Eggers has a “story by” credit.)

Krasinski then took the idea to Damon, who had just finished working with Krasinski’s wife, Emily Blunt, on The Adjustment Bureau, and was looking for a movie that would be his directorial debut. They decided to write it together. Damon, who hadn’t written a script since he collaborated with Ben Affleck on Good Will Hunting (he is also credited with writing 2002’s Gerry, a movie Damon says is mostly improvised), says he can never find the time. “It takes a lot of time to write. I’m so busy, and I do need a partner to write,” Damon confesses.

They hired a news reporter to find a story they could fictionalize. The reporter produced “mountains of research,” says Damon, which they used as the basis for the script. When they were done writing, he and Krasinski traveled to upstate New York to scout locations. There they met people who thoroughly debunked the narrative. “It was one of those situations where the reporter came back with the story we wanted to hear,” says Damon, who thought they had reached an impasse. “But after a few horrible days, I read it again, and I called John and said, ‘I love these characters!’ ”

So the cowriters transplanted the characters to a mountain in Alaska, and they set their story amidst salmon fisheries being poisoned by run-off from nearby copper mines.

Krasinski saw a 60 Minutes segment called “The Shaleionaires” and was inspired to do a pass of the script on his own, this time about a community dealing with fracking. He brought the draft to Damon in Vancouver, where the actor was shooting Elysium, a visual-effects-heavy movie set to come out next summer. “I realized we had something much better than wind farming,” says Damon. “Because the stakes are so high. It’s not really a choice—between losing your family farm or not.”

When Damon and his family moved to Malibu to shoot We’ve Got a Zoo, Krasinski went to their house every weekend where they would hammer away at the script, empowered by their new subject matter.

At the end of 2011, Damon was doing press for Zoo and planning to direct Promised Land in the new year—until he had a change of heart. “I was done with all my work for the year and I looked at the reality: I just could not do it,” says Damon, who couldn’t imagine spending so much time away from his family again, this time to direct, which would mean longer hours and weeks in prep and post.

“It was like someone telling you Christmas is not happening this year,” recalls Krasinski.

And then a Christmas miracle occurred. Damon was heading to Florida for a much-needed vacation with his family. “It was that moment on the plane when they’ve told you to turn off your phone, and you’re surreptitiously sending emails,” says Damon, who got one out, with the script attached, to Gus Van Sant, who had directed Damon’s first script, Good Will Hunting.

By the time Damon landed, Van Sant had agreed to direct the film. “I like to joke that as a producer I clearly know what I’m doing: I fired myself and replaced myself with Gus,” Damon says.

The movie went ahead, but not without some measure of caution. In speaking about Promised Land, everyone involved had long stuck to talking points that portrayed the movie as being about a community that comes together in a crisis. “Once it came out that it was anti-fracking,” Krasinski says, “it’s hard to shake that until people see it.”