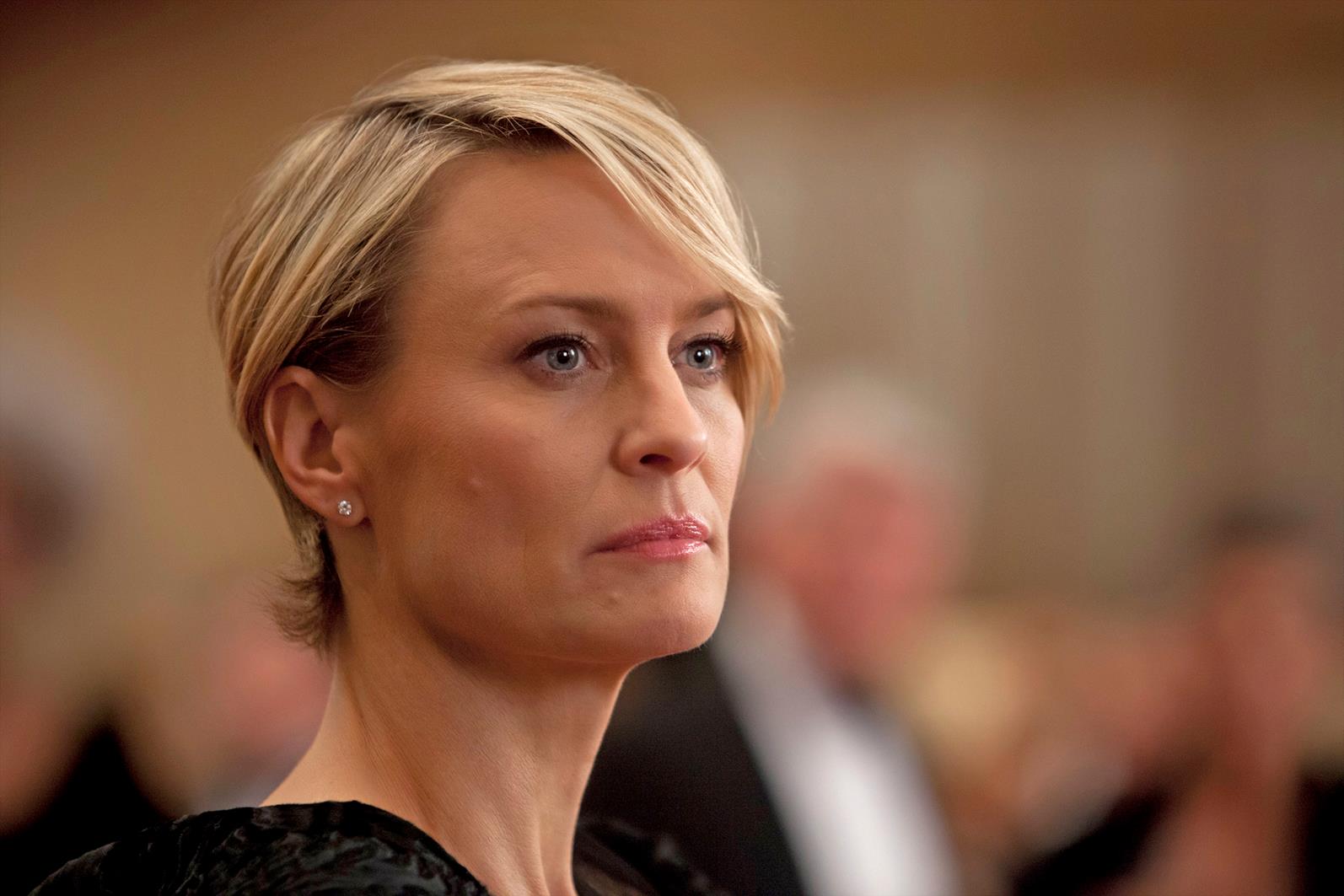 Cari Lynn is an AwardsLine contributor.

With her early iconic roles of Buttercup (The Princess Bride) and Jenny (Forrest Gump) nestled into filmgoers’ collective consciousness, it’s easy to forget that Robin Wright’s roots were in TV, where she garnered three Daytime Emmy noms in the mid-1980s for her role on the soap Santa Barbara. Now, after a couple decades of a lauded but intermittent film career, Wright is back on the small-screen in Netflix’s House of Cards, where she’s generating Emmy buzz for her deftly nuanced role as Congressman Underwood’s (Kevin Spacey) formidable wife, Claire, a cold-blooded schemer with hot flashes.

You started in TV, but did you ever think you’d be back on a series?

No. Never. Never imagined. The other thing is, I never watched TV—well that’s not true, I did watch Friends with my kids, but that was about it. But David Fincher said to me, “This is a new medium; it’s not television. No one’s ever done this revolutionary format. This is where the future is heading.” We’d done Girl with the Dragon Tattoo together, and I wanted to be in business with him. I’ve been in this business nearly 30 years, and you get to a point where you know who you want to work with. I wanted to work with David and Kevin and (writer) Beau Willimon. It’s a true collaboration.

House of Cards is based on a British series, only your character was a minor role—a wife in her husband’s shadow, merely enduring his behavior. Did Claire always have such a prominent role in the U.S. version?

David brought that point to my attention in the beginning and said I could watch the British series to get a sense of where we’re going, but that I was not going to gather anything about the wife and that we were going to expand that role tremendously. He said she will build and evolve as we go—and I love that, that’s why I get up and want to go to work each day.

Claire has been described as an uber-bitch. How do you see her?

I see her as a professional calculator, as in, she’s very calculated in what their moral code is and what their standards are. There’s an agreement between her and her husband: This is what we accept, this is what we don’t. Is she evil? No. It’s more Machiavellian, more like, whatever it takes to achieve what we want. And yet, they’re human and those beautiful moments come up. They get hurt. They react. They retaliate.

At first, Frank and Claire seem like the ultimate power couple. But then it’s deftly revealed that they have a rather nontraditional marriage bargain. Did you know at the outset how the season was to develop?

Yes, I was aware of this part. It was described as: they are business partners but have a love and respect for each other. She is Lady Macbeth to his Richard III. They have an empire they need to hold up. I did know they would look the other way if they had to have dalliances to further their throne.

Your character is one of the most layered in the series, and one of the most reserved. Yet you convey a lot with silence and a seemingly content, yet chilling, smile. Did you toy with Claire’s disposition? She could easily have been as hot-tempered as her husband.

David helped me so much with that. I didn’t really know what to do in the beginning. I thought, this character is just Robin dressed in more grown-up clothes—not the real-life me who’s always in Levis and a T-shirt. She has a sophisticated manner with sophisticated makeup and hair. And then David gave me a basic but great piece of advice. He said, ‘Don’t move so much. I want you to be very still. She’s like a bust, the strength, the pillar next to Francis. She can crack a little with emotion, but it will never break her.’ I thought, Oh this I can relate to in a sense memory way. So I played her very contained.

Your pixie cut made news. I’ve worked on Capitol Hill and can vouch that practical cuts are all the rage. Was this style specifically for the show?

My hair was fried from doing three movies with different hair colors, so I’d already chopped it off and had an asymmetrical cut. But there was a little concern that it was not a conventional D.C. haircut, so we had to add pieces to make it longer and more traditional.

Some of the most revealing scenes come at the windowsill when Claire and Frank share their allotted cigarette—yet I was surprised to learn you only recently quit smoking. How did you approach the frequent smoking scenes?

It could have been that the characters take a walk or play backgammon, but the smoking thing is such a rebellion. It’s like two teenagers doing their secret, coveted thing together. Because a congressman and his wife would never smoke publicly! You know how the press blew up over Obama having a cigarette. Actually, both Kevin and I quit smoking halfway through the season, unbeknownst to each other at the time. But we both switched to smoking herbal cigarettes in the scenes. Although he’s much stronger than I am, he truly quit. I cheat every now and then.