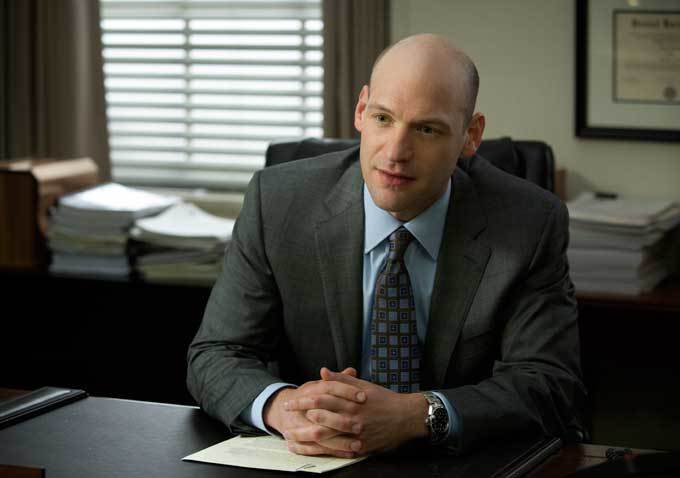 Cari Lynn is an AwardsLine contributor.

Although Oberlin and Tisch-grad Corey Stoll received accolades for his 2004 stage performance opposite Viola Davis in Intimate Apparel and was a series regular on Law and Order: LA, his breakout came in 2011 playing Ernest Hemingway in Woody Allen’s Midnight in Paris. But it’s his role as Peter Russo in David Fincher’s lauded House of Cards that is now generating Emmy buzz. Stoll plays a well-meaning U.S. Representative from Philadelphia, whose dalliances with debauchery land him beholden to the Machiavellian congressman from South Carolina played by Kevin Spacey.

Peter Russo is such a richly nuanced character. How did this role come to you?

It happened before all the pilot season craziness. I read the script and fell in love instantly. I put (my audition) on tape, but then didn’t hear anything for months. When they did come back to me, it was to meet with David Fincher. The irony is that when I first auditioned, I thought it was a part that could go on for years. It’s a high bar when you’re looking at a pilot, and you want a character that you could play for a while, a character where you can see all the iterations. It was in this initial meeting when David gave me the basic character arc, and there was part of me that was holding some sort of hope they would change their mind (about the character’s demise). But then I began to see it as more like doing a film role, and I could really dig in in that way.

I had an overall eye-opening experience when I interned on Capitol Hill. Was there anything about politics and D.C. that you were surprised to learn?

I was shocked at how young the city is! Interns and young staffers are the people who make the city function. I’m not the first person to point out the parallels between Hollywood and D.C.—the intersection of image-making, power and money. I saw that the reason some people originally went into politics and where they wind up can get mixed up very easily. The game can be so intoxicating.

You’ve had more TV experience than David Fincher, Kevin Spacey and showrunner Beau Willimon combined. What was it like to be the veteran TV actor on set?

(Laughs.) It didn’t give me an advantage that’s for sure. We all seemed to approach this as, we are just telling stories. It wasn’t typical in that every episode has to come in at a slated time. Some episodes were 42 minutes, others closer to an hour. The way Beau and the other writers told this story was on their own terms. It wasn’t about this is a certain form and you need to know the form. I would sometimes look at the way shots were being composed and marvel at how filmic it was. They made the form come to them.

Netflix slated two seasons, 13 episodes each, from the get-go. Did shooting this way differ from other series?

It wasn’t an easy shoot. The hours were long; we were away from our homes (shooting in Baltimore). There were definite challenges, but it did feel more filmic. That said, there was still a TV aspect where you’re getting scripts as you’re going along. But there was an intensity and focus that certainly felt different from any other TV I’ve done.

Your character is an addict with deep-rooted pain, yet he really wants to do the right thing politically. What’s it like to play someone who’s his own worst enemy?

That’s what was exciting to me about the part. Over the past couple of years I’ve played a lot of incredibly self-confident, high-status, alpha men, which were fun, but this was great to be able to show a much more vulnerable side. There’s something liberating about that. I think we all understand disappointing yourself. Especially in the acting profession, which is probably similar to a political career, even the most stable, head-on-straight person is still going to be confronted with doing something that they shouldn’t, that could affect their job or cause them not to be at their best—even if it’s something as simple as taking a red eye for an audition at 6 a.m. the next morning and you know you’ll be dragging. It’s a discipline that’s relentless and I don’t know an actor who hasn’t let himself down at some point. I imagine it’s the same in politics. There’s always the potential to self sabotage.

Peter goes on several benders throughout the show. How did you achieve the red-eyed, hopped-up look?

Good makeup definitely helps. But in general, I’m trying to go in an opposite direction. It’s sort of cliché, but when you’re playing drunk, your character is trying to appear sober. Peter, for the most part, is pretty good at it. He’s had a lot of experience with just getting by. Beau and I talked a lot about Peter, and it was exciting that as the episodes went by I really had the feeling of being able to participate in creating who this character was.

We leave the season with Francis Underwood (Spacey) feeling haunting by Peter’s spirit. Will you return for any cameos?

It was headline news recently that you’ve had your pick of roles. How did you decide upon FX’s The Strain?

When you meet Guillermo del Toro, the second you walk into the room you want to work with this guy. He has such insight and enthusiasm for telling stories and for characters. To feel like you’re in good hands in the big picture and in the day to day is really exciting. And FX is a great place to be. Also, we’ll be doing 13 episodes, so that still allows me time to explore other projects.