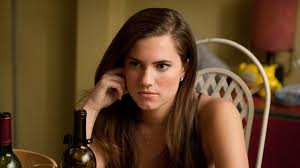 Michael Slezak is senior editor of TVLine and an AwardsLine contributor. This story appeared in the June 12 issue of AwardsLine.

You know those people who brag about not having a television? Girls’ Allison Williams has a handy response for ’em. “I always say very dryly and very honestly, ‘You should invest in one. I’m not even saying you would necessarily like our show. But TV is so good right now.’”
Williams’ awareness of the number of great performances under consideration this Emmy season makes it all the more “exciting and unbelievable” when her name gets floated as a possible contender for supporting actress. And while she’s quick to credit Girls creator and star Lena Dunham—as well as the show’s writers, directors and hair and makeup staff—for helping her bring to life the rudderless Marnie Michaels, Williams admits that “it’s a really fun challenge to play someone who seems to have it all together and yet has this anxiety bubbling beneath the surface. It’s an anxiety she isn’t necessarily aware of herself.”

How did you view Marnie’s season journey overall?
It was really hard. I really feel for her. We are certainly different, but we have enough in common that I look at her and I root for her and I want the best for her. I wish for her that she had something that she was passionate about so that in moments where everything else seems to be unraveling, she could turn to those things that she really truly loves and believes in. But that seems to be another thing that she’s lacking.

One of the more shocking moments of the season was when artist Booth Jonathan (Jorma Taccone) takes Marnie home from her hostessing job and locks her inside his art installation—a tiny box with walls made of TV sets—and later has sex with her. How do you approach a scene like that?
The scenes of her crawling into and out of the booth were shot about two months prior to the scene inside the booth—just a little fun fact. The craziest thing about that latter scene was how those old-school TV sets emit quite a bit of static, and that sound is unmistakable. And of course, those images on the screens were just gross. But I’m the kind of person that has to fast-forward parts of True Blood. I get easily queasy.
Anyhow, we shot Marnie’s emergence (from the box) in so many different ways. There was one where I came out and sprinted away. There was a version where he kissed me afterward. But I loved that the one they chose was where Marnie is like, “What the fuck?” You know, total PTSD, and then she says, “You’re so fucking brilliant.” I don’t know if she really means that. She just knows that that’s what she’s supposed to think. She values his perspective on the world because he takes her down, and Marnie has always had this perverse love of people like that.

I loved the scene after Marnie realizes she’s not Booth’s girlfriend, just his paid assistant. We see her bravely lying to Hannah (Lena Dunham) on the phone that everything is perfect and happy.
One of the reasons that scene was heartbreaking was that Marnie is wearing the skeleton of this (expensive) dress that she had bought to impress Booth. She realizes how silly it is, and she’s completely stripped of her dignity. It was really hard to shoot that moment, and it was hard to watch.
We also have to dish the scene where Marnie goes to see her ex-boyfriend Charlie (Christopher Abbott) at a work party celebrating his huge success. I loved every post-relationship interaction that Charlie and Marnie had. Those scenes were the most fun for me because if I haven’t been in that situation, my best friends have been in that situation where you’re out of a relationship yet you still want that person in your orbit. It’s not even necessarily a narcissistic thing; it’s just human that you want to be sure that that person is thinking about you, consumed by you. So all of those scenes to me were about that. She’s standing there outside the bathroom and suddenly jabbing Audrey (Gelman), just so subtly while simultaneously trying to make herself seem really cool and nice and understanding. Charlie sees straight through it for most of the party.

She grabs the mic to give the most oblivious performance of Kanye West’s “Stronger.” How did that scene come to such vivid, awkward life?
I knew I had to sing it decently, but not as if I were performing at Carnegie Hall. And what ended up in the episode was recorded live in the moment. It’s not like I recorded it in the studio and then lip-synced it on set. So it was as agonizing as you’d imagine, except I was wearing an earwig, which means I was the only person there who could hear the (music) track. All of those extras who were standing there for every single take, they could only hear my voice a cappella. The looks on their faces were very organic. Anytime I hear (the song) now, I just have this Pavlovian response: Music, blush, embarrassment.