Thomas J. McLean is an AwardsLine contributor. This article appeared in the Feb. 13 issue of AwardsLine.

The film editing race is both diverse and expected. All five nominated films are also up for best picture, and the individual editors range from three-time Oscar winner Michael Kahn to several first-time nominees and one nominee, William Goldenberg, nominated for work on two separate films.

We talked with the nominated editors and asked them to run through a key scene from their films—one that was crucial to making the picture work, either from a tone perspective or a more technical one. The results were as diverse as the nominated films themselves.

Goldenberg says Argo’s incongruous quality was epitomized in an often bizarre sequence that cuts from the elaborate table-read of the fake screenplay at the Beverly Hills Hotel to the houseguests trying to entertain themselves in their long isolation to Iranian forces frightening hostages at the U.S. Embassy in Iran with a mock execution.

“When I read the script, I thought this was a scene where if we can make this work tonally, the movie will work,” says Goldenberg. “Because it’s all these different tones colliding together, and if all these expositions can work as a scene, then I think what we’re trying to do with the movie will be successful.”

Starting with actual news footage from the era, Goldenberg built the sequence slowly as each segment was shot. “The first cut of it was really strong, and Ben (Affleck) really liked it. But then we had too much of the mock assassination and maybe too much newsreel footage. Then we had too much of the houseguests. And it’s a process of over weeks and weeks and weeks of honing and finetuning and shaping and trying to make sure that the story points we wanted to highlight were being highlighted and that it was clear that this is a mock execution.”

Unlike most films, their luxury was time in the schedule for reflection. “(Affleck) has an editing room at his house, and we don’t live that far from each other so I was able to go up there on Sundays when it was a little calmer. We were able to sit calmly and look through the footage, and it was more about what direction the movie was going and how it would inform the next week’s work,” says Goldenberg, who says he finished editing the film in June. “I think it was helpful for him. I think it was helpful for me obviously to get reactions. You’re always nervous as an editor about how a director’s going to react to your cut footage initially.”

Keeping the story moving was a challenge on Ang Lee’s Life of Pi, which was shot with extensive visual effects for the tiger and in stereoscopic 3D. The film focused on simplicity in its storytelling, with fewer than 1,000 shots in its two-hour running time.

Squyres says the scene in which Pi, played by Suraj Sharma, tries to train the tiger with a stick in order to ensure his own survival was tough. “The tricky thing with a scene like that, it’s really all about the content of the scene itself,” says Squyres. “I’m basically cutting from Pi to the tiger to Pi to the tiger. There’s a couple places where I kind of go out to a wide shot, but essentially, there’s not much I can do editorially to ramp up the scene.

“So in order for the scene to be riveting, interesting, exciting, and important,” Squyres continues, “I have to pace it, and I have to go with the best moments from Suraj’s performance, because he’s doing a combination of things: He’s trying to look strong and confident, but at the same time as an actor he’s trying to show underneath that he’s terrified.”

Complicating that is that one of the performers—the tiger—was a mixture of shots of more than one real tiger and a CG tiger.

The scene was prevized in a general way, and Squyres says he consulted on set with Lee more than on any of their other films to ensure they got what they needed. “There were a number of little beats of action that we dropped,” he says. “We kept modifying it and tightening it, and we at one point did decide we were stretching things a bit much. It went through a bunch of changes, but that’s editing.” 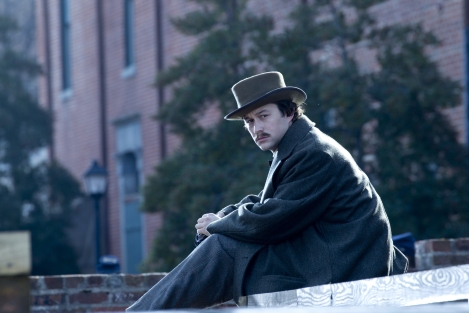 Steven Spielberg’s Lincoln is, like the famous president at the story’s core, a deliberate creature. The movie alternately gets intimate with the 16th president, and pulls back to give the broader view of the man and his achievements.

Few sequences in the film exemplify editor Michael Kahn’s contributions to the movie as a scene in which Lincoln visits a military hospital in the company of his son, Robert. The establishing shots show the pair riding up to the hospital sitting opposite each other in silence in a horse-drawn carriage, cutting closer as Robert tells his father that seeing the injured soldiers will not alter his plan to enlist. Undeterred and unsurprised, Lincoln leaves his son in the carriage while he enters the hospital.

Cutting back to Robert, who sits alone outside, a covered wheelbarrow pushed by two soldiers draws his attention. Curious, Robert gets out of the carriage and looks down to see the wheelbarrow has left a bloody trail. He follows and watches the soldiers unveil the severed human limbs in the wheelbarrow and dump it into a large pit with others. Kahn then cuts in close on Robert, who despite his bravery is rattled, and turns back in the cold winter sunshine.

Kahn then goes in tight on Robert’s hands, as he fumbles an attempt to roll a cigarette, tears forming in his eyes as he tosses aside the rolling papers and tobacco in frustration. When Lincoln asks him what’s wrong, he towers over the crouching Robert, the camera alternately showing Lincoln as a towering figure whose shadow crosses that of his son and as a man looking down and offering a way to help.

Robert stands to make his argument, and Kahn cuts to a wider shot of the men. Kahn then goes in tighter and alternates more quickly from Robert to Lincoln as the argument heats up, with Lincoln’s slap across his son’s cheek coming as both a surprise and the deliberate act of a man who knows what he’s doing.

Lincoln immediately tries to comfort his son, who pushes him away as Kahn cuts to a wide shot, while Robert storms away from his father and declares his intention to enlist in the military no matter what. Lincoln takes the news solemnly, turning away from the crowds on the street and looking downward, muttering to himself.

Director David O. Russell sees editing as a continuation of the writing process, with an excellent example being how a specific music choice shaped a key sequence in which Pat Jr., played by Bradley Cooper, returns home after meeting Tiffany (Jennifer Lawrence) and manically tears the house apart looking for his wedding video, ultimately ending up in a physical altercation with his father, played by Robert De Niro.

“A lot of it was driven by the music,” says Cassidy. “The first versions of the scene were done where—and this would make sense from a story point of view—he would hear the trigger music in his head, the Stevie Wonder song that had triggered him in the doctor’s office. So it made sense to build the scene that way, and we could never get that to work.”

The breakthrough came when Russell suggested they try cutting it using the Led Zeppelin song “What Is and What Should Never Be.” “It’s Led Zeppelin—you can’t cut the music, it’s sacrosanct,” says Struthers. “And then we looked at the themes again, and we looked at the cuts and did everything to just shape it to the manic nature of the song, which seemed to fit perfectly with Bradley’s mood at the time.”

“Once we had done that, it unified the whole idea of the night,” says Cassidy. “It wasn’t several scenes in a row, it was this one explosion which then had some ring out, which is basically Bob (De Niro) going next door chasing the neighborhood kid with the camera.”

Helping out the process was Russell’s working methods, which involve keeping cameras rolling for multiple resets with the actors.

“In the dailies of these 20-minute takes, we can kind of see the evolution of this scene,” says Struthers. “You can see the amazing performances he gets out of these actors, the rhythms they get into. But we can also see how David and the cameraman are getting into rhythm, too, and how they’re figuring it out as they go along.”

No section of the movie was less formed than a key middle sequence following the mechanics of the hunt, as the CIA seeks out the phone number to al Qaeda courier Abu Ahmed al Kuwaiti’s mother and use it to locate first Ahmed and then the compound where bin Laden himself is staying.

“It could have derailed the movie, and I think it turned into a really strong section,” says Tichenor. “There are sections of it that count for two to three minutes of screen time, but there were three days of dailies—three long days of dailies, just to see it all and figuring what went in and what went out.”

Making sure each shot had a point and communicated clearly the plot was another trick. “There was a lot of discussion about how much of that story we needed to tell, and if we needed to show if he had a cell phone at all,” says Tichenor. “One day we condensed it down to shorter than it is in the movie. We thought we had unlocked it, we had figured out a way to really shorthand the story and make it exciting. And as I looked at it and looked at it, I thought, ‘Uh oh, it doesn’t make sense.’ ”

“In the unraveling of it, we found a midway point that was where the movie ended up in structure. In a weird way, we had to take a giant step backward to take a step forward. It was that misstep that led us to the key to unlock the sequence,” Tichenor says.

“One part of that sequence that Dylan and I won a major battle with (was) the sequence (that) begins with Daniel, Jason Clarke’s character, (getting) a phone number for Abu Ahmed. And the next section starts with this trap and trade section where you get a rough idea of the overwhelming scope of finding people and finding these phone numbers and the global scale of it. That was never in the script. Dylan and I both felt strongly we needed to see something happen, we needed to see somebody in a big server room, we needed to see the process a bit,” says Goldenberg.