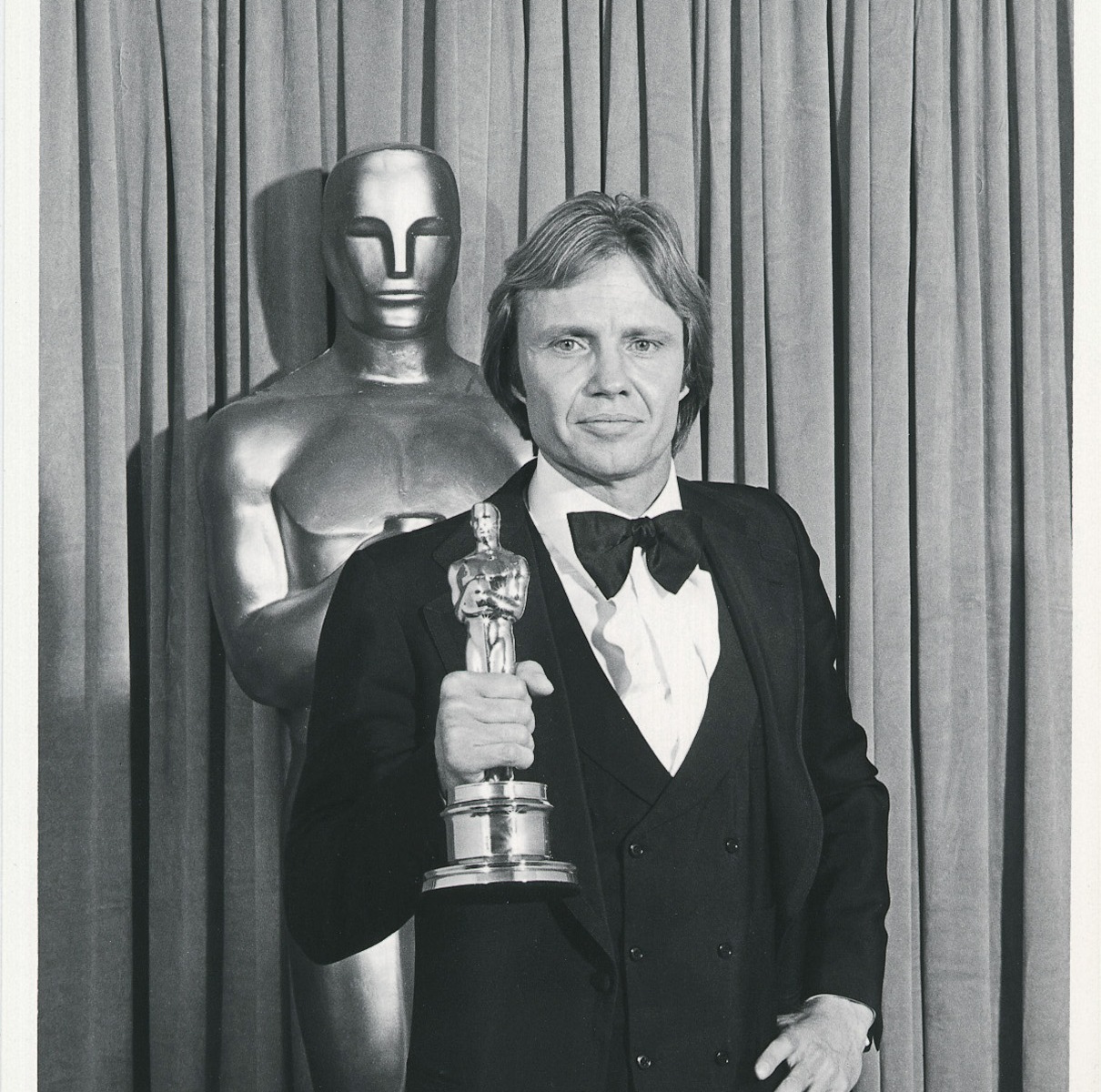 “There were wonderful films represented and great actors that evening. Bobby De Niro was up for The Deer Hunter, Warren Beatty for Heaven Can Wait, Gary Busey for The Buddy Holly Story, and Laurence Olivier for The Boys From Brazil, and I was the frontrunner according to Vegas odds and everything else. It seemed to be a moment between two Vietnam films, one being Deer Hunter and the other being our film, Coming Home.

A couple days before, I flew in from New York. Two seats away from me was Laurence Olivier. He was just recovering from prostate cancer. He had very thick glasses, as he could hardly see, and had arthritis that was so severe (that) when he stood up to put his coat on; he needed the help of his son Richard. It was very sad for me because I had seen Olivier play kings and do a magnificent job. I was really attentive to his entire career, and in his generation, he was the great actor who inspired and created dreams for other actors. So he was the man. Then I saw him in this state.

Then the night before the Oscars, I got a phone call at home. ‘Hello, Jon, this is Larry Olivier.’ I said to myself, ‘Oh, my God, I didn’t know what to call him!’ It was Lord Olivier. I explained my real attentiveness to all his work and the kindness of his call, and he called to say how wonderful my performance was. Can you imagine? That was a big deal.

Now, I go the Oscars and I’m sitting there with the nerves of that event. I had a little something prepared to say if it came my way, and all of a sudden Cary Grant introduces the lifetime achievement award, and it’s going to Laurence Olivier. There I am, part of this focus of that evening and even the center of that focus in some way because the best actor award is one of the big ones. So Cary Grant comes on stage and introduces very beautifully, as he does in his charming style, his friend, Larry Olivier.

And Larry Olivier walks out on stage. And he has no glasses. And he’s standing erect. And he gives a speech that is prepared, like a piece of poetry: A brilliant, beautiful speech of gratitude to the Academy, and to the business and to the art of filmmaking and his career. It was like watching a great sports moment. I’m thinking, ‘Oh, my God!’ He’s like a tightrope walker. I know the guy can’t move his arms. I know he can’t see. I know he’s in a debilitated state, but look what he’s doing. As I’m watching him, the people who are running the show saw my response immediately. I was very moved by him. And then as he started doing his speech, I was overwhelmed because no one comes that prepared in some sense. He was showing us not only through his career, but through his appearance, how to handle that moment in the spotlight. They cut from his speech to my response, back and forth. Finally, when he finished, I went ‘Phew!’ It was like watching an impossible act happen, and when he concluded with such a gracious speech, finishing with a perfect manner and words, it was ‘Bravo!’ for all that it meant.

When they finally announced my name, the first thing I said graciously and profoundly is that I was overwhelmed by listening to that great man speak. Sometimes, when they replay my Oscar acceptance, they play back that moment when I’m moved by Olivier as though it was my response to getting the Oscar. But it wasn’t. My response to getting the Oscar was to put my head down and say, ‘OK.’ I took a real long pause and made my way to the stage eventually. I didn’t have that kind of emotion coming off the announcement of my name. It was quite a stirring moment.

My real focus was on Olivier. It took away from me a little bit, so I was a little bit more comfortable, and it put my award in perspective in some fashion. It was a great thing to see the great man in that moment and to know all the things that I knew about him. I wasn’t so moved by receiving the Oscar. I was moved by it, but the emotion of that evening was invested in watching Olivier take the stage.”—As told to Anthony D’Alessandro