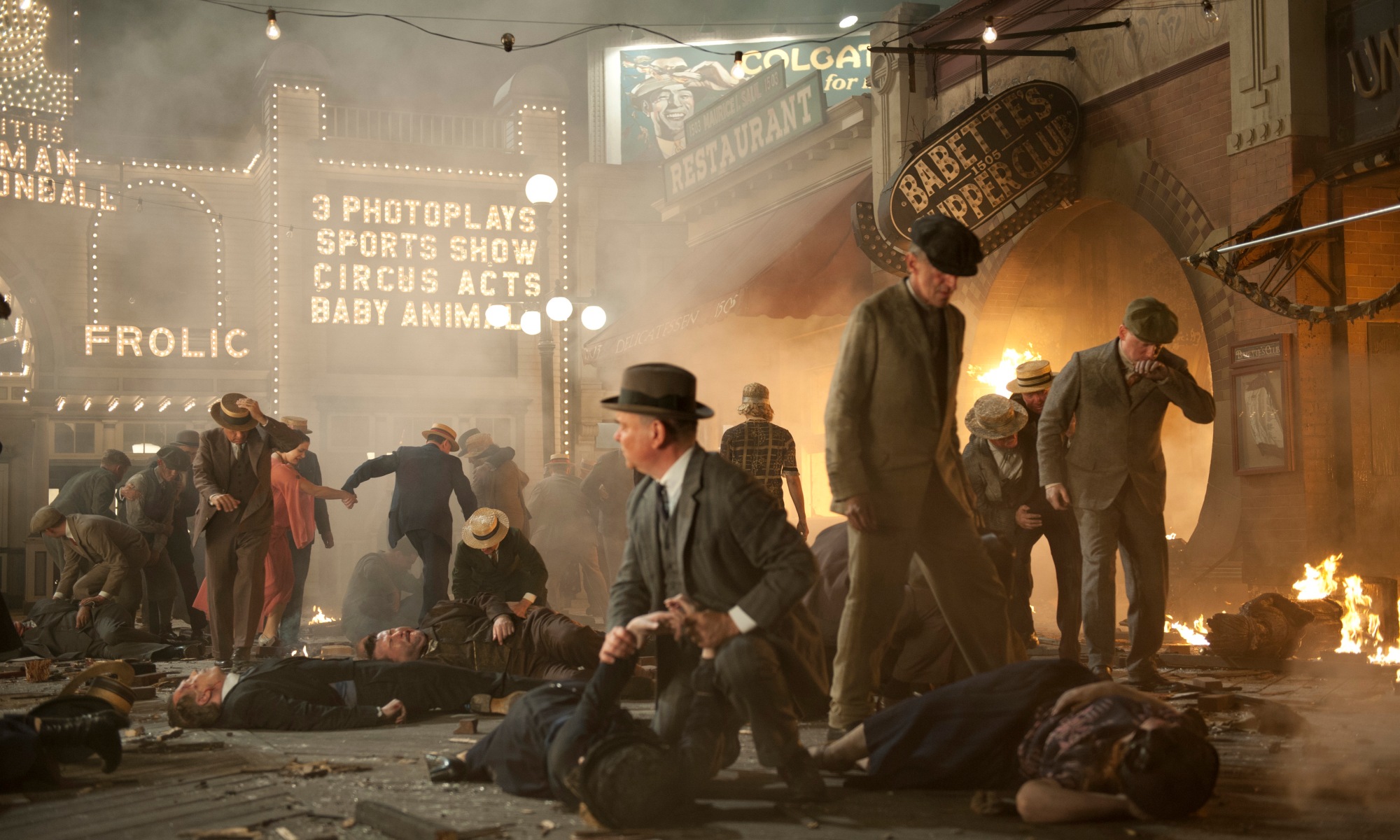 This story appeared in the Jan. 2 issue of AwardsLine.

Rusty-voiced, sweet-natured, a tin mask covering up his facial World War I wound, Richard Harrow, as played flawlessly by Jack Huston, is the type of vigilante one might find in a DC Comic book, warts and all. But in HBO’s 1920s epic Boardwalk Empire, he’s a supporting character that creator Terence Winter and his writers transformed from late gangster Jimmy Darmody’s trusted sharpshooter into a human being. For the bulk of this season, Harrow refrained from killing off any bad guys as he wooed a war veteran’s daughter and acted as the surrogate father to Darmody’s orphaned son, Tommy. “Richard knows how to kill. He doesn’t do it well; he does it great,” says Huston about Harrow, who even puts fear in lead Atlantic City kingpin Nucky Thompson (Steve Buscemi) “I reminded Terry that I was getting an itchy finger, and he said, ‘Just wait.’ ”

And then the Timothy Van Patten-directed season 3 finale, “Margate Sands,” arrived. In a riveting swinging-camera four-minute gun ballet, Harrow rescues Tommy from his duplicitous grandmother Gillian Darmody’s (Gretchen Mol) whorehouse, which notorious gangster Gyp Rosetti has seized. The payoff: Just as Harrow fakes his surrender, he annihilates the hitman who has a gun to Tommy’s head. “Tim told me, ‘You’re going to be happy with the finale. It’s very Tarantino-esque,’ ” says Huston, who carried around 40 pounds of fake guns, earning cuts and bruises during the scene. “I was meant to shoot nine people, but they kept adding.”

The character of Harrow, from Huston’s nuanced acting to his fireworks finale, is just one example underscoring the cinematic huzzah that punctuated Boardwalk’s third season. So what made this season better than all the others? While the media has long drawn stylish similarities between The Sopranos creator David Chase and his protégé Winter, especially after Boardwalk’s abrupt season 2 finale in which Nucky kills Darmody, it’s clearly evident that Winter came into his own. 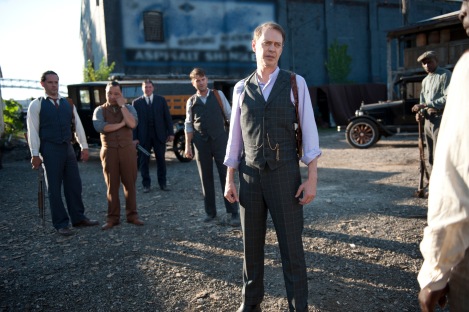 “David (Chase) didn’t often engage in wish fulfillment for the audience. If it didn’t work for him for the storyline, he didn’t feel obligated to pay things off. I don’t necessarily feel obligated, but I enjoy setup and payoff,” explains Winter, who would sometimes encourage to payoff storylines on The Sopranos. “I knew Harrow going into the Artemis Club would be a great crowd-pleasing moment. That’s what I’m waiting to see all year is Harrow be the bad ass that we know him as and rescue Tommy. (In season 3), it’s all about that ride and the entertainment and the catharsis.”

Adds executive producer-director Van Patten: “We promised war at the end of episode 11 between Nucky and Rosetti. The last image is of Al Capone and his troops arriving (to help Nucky), and we felt that we had to deliver. I wanted (episode 12) to be part Sam Peckinpah, part Sam Fuller, part Sergio Leone, part Arthur Penn, while referencing Raoul Walsh’s films. When Nucky and (his brother) Eli are trapped in that lumberyard, it felt like a western.”

Nonetheless, one can see Chase’s influence throughout Boardwalk, and it’s that mixture that enables season 3 to rival the gangster and western genres to which it pays homage. Winter told Deadline’s Mike Fleming Jr.  in a spring AwardsLine interview that one of the takeaways from working with Chase was “dismissing the first five things that occur to you” in the writers’ room in order to keep the story fresh. Case in point: It would have also been a crowd-pleaser to see Nucky enlist Harrow’s help to mow down Rosetti’s gang. However, Harrow operated on his own accord. “That was certainly on the table, and we dismissed that for the very reason that you’d expect that to happen,” Winter says.

Likewise, starting season 3 a year later in the characters’ lives and glossing over season 2 cliffhangers were also nontraditional means of handling unraveled plot. “Starting in 1923 put the characters in a different place physically and psychologically, and this was way more challenging,” says Winter.

But the lifeblood of season 3 belongs to the über-villain Rosetti—a twisted, short-fused, perverted gangster with a fetish for S&M who has his eye on taking over Nucky’s Atlantic City bootlegging empire. Having played lovable lugs like Vince D’Angelo, the boyfriend of Will Truman on Will & Grace, Bobby Cannavale owned Rosetti’s ferociousness, outstripping such hothead turns as James Caan’s Sonny Corleone in The Godfather, and yes, even James Gandolfini’s Tony Soprano. “People told me that they covered their eyes when Gyp came on screen,” says Winter, adding, “Bobby never read for the role.”

Cannavale was one of the few Italian-American actors who Winter never had the chance to work with on The Sopranos, as their schedules never synced. After seeing Cannavale play a heavy, blue-collar type in Stephen Adly Guirgis’ play The Mother**cker With the Hat, “It reminded me why I wanted to work with him,” says Winter. “In the play, he had veins popping out of his head. When you meet Bobby in person, he’s physically intimidating. He understands that predatory way that gangsters have to keep people off balance.”

Unlike the standard HBO villain, Rosetti lacks any redeemable qualities. Heck, in the opening sequence of the third season’s first episode, Rosetti bludgeons an old man to death with a tire iron after he helps him fix a flat, and then steals the guy’s dog. “We never start off with a cold opening like that, introducing a strange character, but we wanted to interject someone in the show that would distinguish it from last season,” says Van Patten.

The birthing of Rosetti by Winter and his team stemmed from the fact that as Prohibition progressed, the decade became darker. The average person began relying on bootleggers for their liquor, especially as their stockpiles ran dry. Competition and profit margins were greater, and the game got dirtier.

“As things got competitive, we needed to put Nucky under the most possible pressure. He needed a nemesis like Gyp. Nucky creates a monster in a subtle moment when he decides he’s not going to do business with him. One misstep with a guy like Gyp, and a mountain grows out of molehill,” Winter explains. 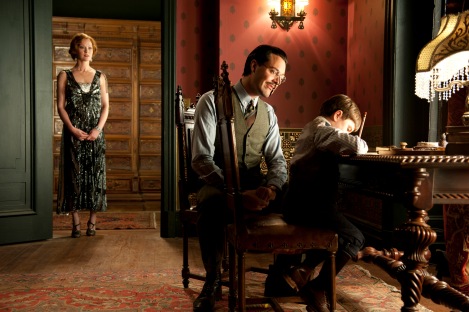 With gangsters running around at a fever pitch, one would assume that executive producer Martin Scorsese had a heavy hand this season, however, “He isn’t involved in story,” says Van Patten. “He reads and notes the scripts, sees and notes the cuts. His notes are precision bombing: He identifies the problems right away, as he has an eye for these things.”

While Boardwalk has been a below-the-line juggernaut in terms of wins at the Emmys over the last two years—with directing wins for Scorsese’s pilot and Van Patten’s second-season finale “To the Lost”—the series has also rallied at SAG over the same frame, with back-to-back drama prizes for best ensemble and best actor for Buscemi. This awards season, both are eyeing their third charms in the two categories. The show won at the Golden Globes in its first year out, along with Buscemi, and both are nominated again this year. For the third year in a row, the Writers Guild recognized Boardwalk with a TV drama nom, but the show has only won once in the new series slot last year.

And if the last season of Boardwalk could be considered mind-blowing, season 4 promises to be even more unhinged as Boardwalk heads into 1924, the year that earned the decade’s moniker, “The Roaring ’20s.” It’s a time when fellow gangsters Al Capone, Meyer Lansky, and Charlie Luciano galvanize their reputations as kingpins, and Nucky goes underground to form his own gang. It would seem that Winter and his team’s M.O. is to outstrip the thrills of such gangster forefathers like The Untouchables, but that’s mere flattery, as Boardwalk’s rule of thumb for mastering the genre is quite simple.

“We pull out the stops, and sometimes it does take us three or four episodes to peel the onion,” says Van Patten, “But at the end of the day, we look at each other in the writers’ room and ask each other, ‘Is this entertaining?’ ”

One Reply to “Behind The Scenes On Boardwalk Empire”