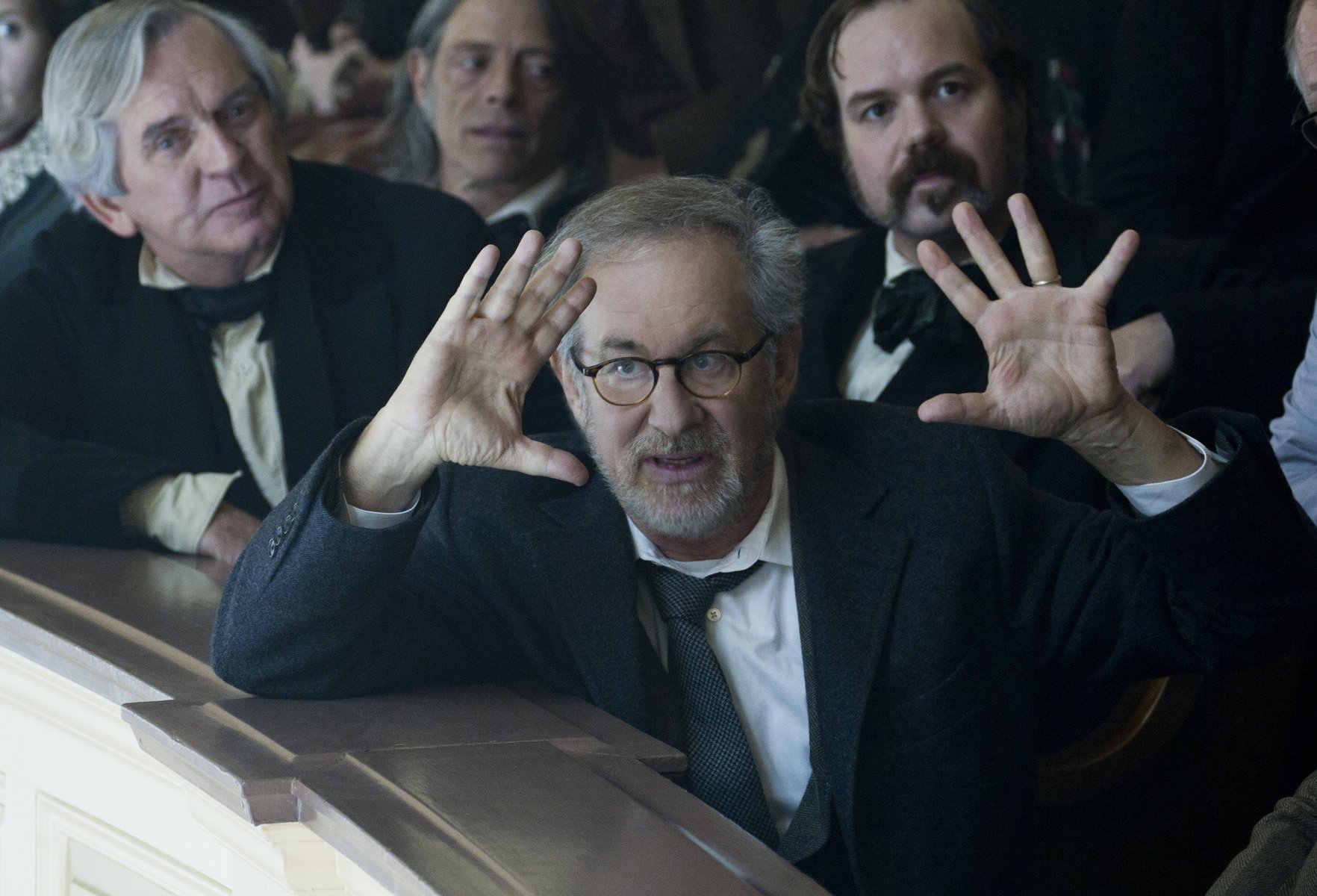 Mike Fleming Jr. is Deadline’s film editor. This article appeared in the Dec. 12 issue of AwardsLine.

Steven Spielberg would like to dispel a few rumors about the kind of set he ran for his latest film, Lincoln. Yes, it’s true that star Daniel Day-Lewis remained in character even when the cameras weren’t rolling, and his sole contact on the set was the director. However, Spielberg himself did not have his costume designer dress him in period-appropriate attire every day—he simply wore a jacket and tie. And although the director admits that there weren’t many visitors to the set, perhaps helping to create the perceived mystique, the intimate nature of the production stemmed more from a sense of pride and respect over its main character than anything else. “Lincoln has not been honored in a dramatic motion picture for 72 years,” says Spielberg, adding that Raymond Massey was the last actor to play the 16th president on the big screen. That attention to detail and reverence for his subject matter has paid off in boxoffice, earning more than $86 million domestically at press time, as well as plenty of Oscar talk. Spielberg recently took time to discuss how he got his first choice of actor for every part and how he and screenwriter Tony Kushner found the right angle to tell the story properly.

AWARDSLINE: It seems unusual that the most successful director in Hollywood would require as long a courtship as you waged to get Daniel Day-Lewis to play Lincoln. How did you finally convince him?

STEVEN SPIELBERG: Daniel had about six years to think about it from the first time I offered him not this Lincoln, not the Tony Kushner-written Lincoln, and not the Lincoln written from Doris (Kearns Goodwin’s) book, but an original Lincoln script that I developed. After turning me down to play the character, I don’t think he ever forgot our encounter. What really did the trick was when he read the Tony Kushner script, and I was able to get a take two, because my good buddy Leo DiCaprio simply called him up one day and said, “You need to reconsider this. Steven really wants you for this, and he’s not willing to make the movie without you.” So Daniel, based on Leo’s phone call to him, offered to read the Tony Kushner script, which he had never read, and also the Doris Kearns Goodwin script, which he had never read. That was the beginning, and I think that’s when the courtship was over. Once he read the script, then he really had to come to terms with the big decision he would eventually have to make, which was, “Can I, with honor, equip this character in a way I’ll be able to live with the rest of my life?”

AWARDSLINE: Have you ever put in as much time convincing an actor to make one of your movies?

SPIELBERG: Never. I’ve never gone on a campaign to get (an actor). I pretty much took no for an answer. It’s one of the few times in my entire life where I was not willing to accept that answer. When he eventually said he would play Abraham Lincoln, the only caveat was he asked me to wait a year. Some of that was because he was sorting out his physical location, where he was living, between Ireland and then eventually he was going to move back to New York, but a lot of it was I think he wanted to really go deep into his own research. And I needed that year too, even though I was ambitious enough to jump into the picture four months after he said yes. We spent a lot of time on the script, and it gave me a year to cast the picture, which means I got all of my first choices. No filmmaker ever gets their first choices consistently, but by waiting a year, I was able to wait for actors to free themselves up for this one.

AWARDSLINE: Describe that eureka moment, if you remember it, where you found that kernel that became this terrific movie?

SPIELBERG: We were trying to tackle the last three years of the president’s life, which is the experience that the senators and representatives had, and that the president and his cabinet had. They didn’t see the action; they weren’t in the battlefields. Lincoln visited the troops, but he didn’t do it with the frontline, except once, and we depict that at the end of our picture. This was going to be a story of his last three years, but the script was 550 pages long. For me, the most compelling part of that screenplay was a 65-page section, which was the struggle to pass the 13th Amendment that abolished slavery. That section is where I stood up and said, “That’s it, that’s our story, that’s our film.” There were so many bullet points in Lincoln’s life that actually the more we spread that out over 550 pages, the (more) superficial his character seemed to feel. Once we focused everything on two great issues—the passage of the 13th Amendment and the Civil War—everything got a lot more concentrated and a lot more focused.

AWARDSLINE: When you have a great actor like Daniel Day-Lewis, how hands-on do you get?

SPIELBERG: Very hands-on, which is what I do, and it’s also what Daniel requires. He is very collaborative. You talk to the directors who have directed him before, from Scorsese to P.T. Anderson—he is an extremely collaborative actor, and the director is his only point of contact on an entire production. We were there for each other from the very beginning, and we spent three and a half months in active conversation, from the smallest moments to large pieces of history.

AWARDSLINE: What was most important to you and Sally Field about the way Mary Todd Lincoln was conveyed?

SPIELBERG: We wanted to be fair. We’ve all read different accounts of Mary and what her condition might be defined as in modern medicine. We knew one thing that everyone could agree to, and that is that Mary was the engine of Lincoln’s ambition. Without Mary, Lincoln would have probably taken his losses. When he lost the senate to Stephen Douglas, he probably would never have imagined that he could go for the highest office in the land. It was Mary that supplied the motor that put Lincoln in a direction with his own destiny. He looked to her as a guiding force, a light, also as damaged goods. He knew when she was being rational and politically savvy, and when she was being emotionally irrational. He would just sit with her for hours and let her vent until she came out of a fog. In that sense, he had so many burdens during his presidency.

AWARDSLINE: I read that you addressed your actors by their character names throughout and retained a feeling of period all the way through. It almost sounds like a Method set. How and who did this help?

SPIELBERG: It helped me, principally, because I took this very seriously. We were playing with one of the most beloved—and mysterious—characters in American history. It doesn’t have anything to do with Method, it has to do with authenticity and having the actors come to work in the morning and feeling a bit like stepping back into time.

AWARDSLINE: You worked on this film for so long—have you ever had a project that’s taken this long for the pieces to fall into place the way they have here?

SPIELBERG: Schindler’s List took 12 years between the time Sid Sheinberg purchased the film rights to the book by Thomas Keneally in 1982, and I began shooting the film ’93, so that was 11 years. I bought the film rights to Team of Rivals: The Political Genius of Abraham Lincoln in 1999, which Doris was just beginning to write. So to answer your question, you’re right. This is the longest.

AWARDSLINE: You skipped releasing this movie during the election because you said you didn’t want this to be a political football. Now it comes out amidst these contentious partisan battles to stave off the debt cliff. What qualities about Lincoln would you most hope to convey to these folks who find it so hard to agree on anything?

SPIELBERG: Lincoln’s leadership is based on a number of precepts, but my favorite one is that he acted in the name—and for the good—of the people. In that sense, the two great things he did at the end of his life—to end slavery, peace for the Civil War—was for the good and in the name of the people. And he put people ahead of politics, although he was artful in using politics to be able to accomplish his task.