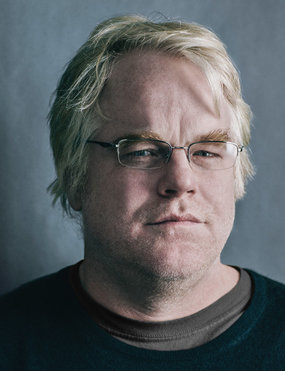 This article appeared in the Dec. 5 issue of AwardsLine.

Philip Seymour Hoffman is a theatrical director, a film producer, and a board member of the Labyrinth Theater Company. But above all, he’s an actor, and a relentlessly inquisitive one. Much like the cult leader, Lancaster Dodd,  he plays in Paul Thomas Anderson’s The Master, Hoffman is continually deconstructing flawed souls on the stage and screen: An accused pedophiliac priest (Doubt), the suicidal Willy Loman (Broadway’s Death of a Salesman), and Truman Capote (Capote) are among the many. Meryl Streep once told the New York Times about her Doubt costar: “One of the most important keys to acting is curiosity. I am curious to the point of being nosy, and I think Philip is the same. What that means is you want to devour lives. You’re eager to put on their shoes and wear their clothes and have them become a part of you. All people contain mystery, and when you act, you want to plumb that mystery until everything is known to you.” In The Master, Hoffman imbues the puzzling depths of his guru with a warm, paternal nuance while exposing Dodd’s violent, drunken underbelly. Of utmost importance for Hoffman was syncing with the dramatic rhythms of Joaquin Phoenix’s delinquent Freddie Quell, who is not only his protégé, but his doppelganger as well.

AWARDSLINE: How did Paul prepare you for the role?

PHILIP SEYMOUR HOFFMAN: It doesn’t work that way, where Paul prepares you. He’s a writer, so he’s writing all the time. The screenplay was an amalgamation of many things he was writing through the years and then eventually, he had a screenplay. He sent it to me four years out from shooting it. I was part of a development process with him of the story and the character. He had a plan and knew what he was going to do, but I was the guy he was bouncing it off of for a while because I was going to play Lancaster. So that’s how I prepared for the part, talking about and ruminating about it. It was a journey we both took together; it’s just that his job was a lot bigger than mine.

AWARDSLINE: How did Lancaster Dodd change between drafts? Because when we meet him and Freddie, they’re at turning points in their lives.

HOFFMAN: The character didn’t change so much, it was more what to put in, what to take out, what to concentrate on. Early on in the development, these two men always had a relationship where they were polar opposites but mirror images of each other. That was something that was making itself known, and there was a love story in that. That the idea—that the turning points in your life are so profound; they mean so much that they’re almost not real. They become these memories or dreams when something is so epic in your life. Or a person you met that’s changed your life so much, you don’t see them anymore. They become mythical. So if any changes happened, it happened inside that paradigm. Those were the themes. And then what was buttressing all of this was the venue which was the early ’50s; based on a Scientology-like movement, based on an L. Ron Hubbard kind of guy from that time. Anytime we got too far away from the core relationship of these two men, and their journey and what they were going to do to each other, and how they were ultimately going to reveal each other—which is the most profound thing—it was no good. The more detailed we were about the movement, the script got away from itself.

AWARDSLINE: How does Paul work with his actors? Does he know exactly what he wants, or does he give you the breadth to do what you want?

HOFFMAN: It’s very clear that he knows what he wants. You see his movies and the details in his movies are astounding, and that’s good for us. You know you’re being taken care of as an actor because the detail around you is so great. He wants the actor to do their job. He has a real respect for actors. If someone can act well, that means a lot to Paul. He holds that very high, and he doesn’t want to get in the way of that. He only says what he feels he needs to say, but ultimately he has said everything before we start shooting. He’s very good at casting. He has an energy about him on set. No, he’s not a micromanager when it comes to the acting. I think the one thing about Paul is that he’s not predictable. The only thing that’s predictable is don’t try to predict him. He might shoot a scene that you thought would take forever, and it goes quick. Then there’s a scene that you thought was small, and he shoots for two days. He’s going to go where the bigger stuff is happening.

AWARDSLINE: The audience reaction to The Master has been divided. Why is that?

HOFFMAN: I really don’t know, to be honest. I think it’s divided a lot of critics.This one really baffles me, because I think the movie is full of emotion and feeling from beginning to end, like Paul always is. I don’t know how you watch the movie and feel distant and cold, as opposed to those who are taken away with it. It’s all heart and primal, gut feeling. It’s all need, love, aching, and craving from the beginning to the end. People have a lot of opinions about the movement: “Is it based on Scientology?” Or people have an opinion about the characters or how Joaquin is as a person. People project all over this more than any film I’ve ever done. (Laughs.) I hear people say things, and I’m like, “Wow! That’s not even something that crossed my mind in making this movie!” I think that’s what it comes down to: The movie allows you to project on it. There’s stuff going on in The Master that one reacts to, that one distances themselves from. I think people take themselves out of it, because there’s something about the movie they don’t want to be involved with. That’s my gut feeling.

One Reply to “Q&A: Philip Seymour Hoffman on The Master”