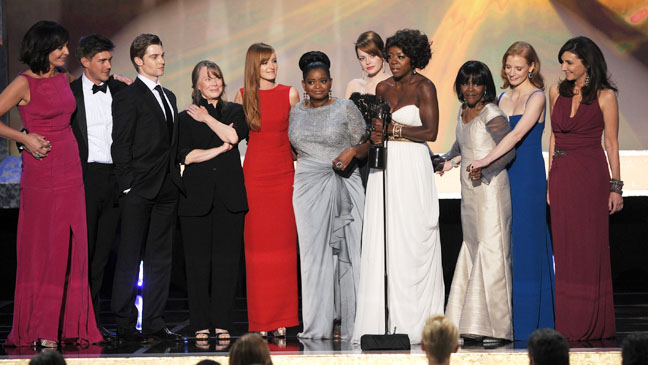 Pete Hammond is Deadline’s awards columnist. This story appeared in the Nov. 14 issue of AwardsLine.

Although the Screen Actors Guild constantly denies that their annual ensemble award for Outstanding Performance by a Cast in a Motion Picture is meant to be anything but that, pundits and prognosticators stubbornly label it SAG’s equivalent of a best picture award. Since the SAG membership overlaps with Academy voters, nominees, and winners of SAG Awards, along with other key guild contests orchestrated by the PGA, DGA, and WGA, they are widely considered to be great harbingers of things to come at the Oscars. In the case of the SAG Awards, which have been given annually for the past 18 years, it is certainly true that their individual acting winners often agree with Oscars, at least 75% of the time.

However the stats for the ensemble or cast award, as it is officially known, are much spottier. Indeed, out of the 17 times it has been awarded, only eight films have gone on to match it at the Oscars (Shakespeare in Love, American Beauty, Chicago, Lord of the Rings: Return of the King, Crash, No Country for Old Men, Slumdog Millionaire,and The King’s Speech).On the bright side, only one past SAG cast award winner, The Birdcage at the third annual awards, failed to go on to get at least a best picture nomination (or even a single acting nom for that matter). The cast award for TV series tends to more closely align with eventual Emmy winners in both comedy and drama categories, but often enough goes its own way there, too.

So why is it an award every Oscar strategist wants to win? Bottom line is the simple fact that actors far outnumber everyone else in the film Academy. They are responsible for one-sixth of the entire membership and can definitely have a strong impact on the vote. And they are virtually all members of SAG, so it would seem to be a strong indicator of Academy sentiment, or so the thinking goes.

“It certainly helps with your campaign to get the ensemble award because people think it is SAG’s closest thing to a best picture, whether it actually is or not. But is it actually going to decide who is the best picture? No,” says one prominent studio awards consultant.

It can give momentum to a struggling campaign just as Oscar ballots are in the mail. Last year, The Help was all but written off at the Oscars after being snubbed in directing and writing categories. But, significantly, it did receive a best picture nom as well as acting nominations for lead actress Viola Davis and supporting actresses Octavia Spencer and Jessica Chastain, just as it did at the SAG awards. When it cleaned up at SAG in a surprise, winning three including the cast award, a record-tying accomplishment, suddenly there were big hopes at DreamWorks that perhaps it could pull off the impossible and pull off a best picture upset. It wasn’t to be, and The Artist, the film it beat for the cast award at SAG, prevailed in the end. Only SAG supporting winner Octavia Spencer repeated at Oscar time. The SAG awards were prescient, though, in giving Artist star Jean Dujardin the best actor prize over favored George Clooney (The Descendants) and Brad Pitt (Moneyball), a feat he repeated at the Oscars a month later. Certainly that SAG win provided momentum for him just as it has done for others in the past.

The cast award is different in the respect that not every best picture Oscar winner or nominee is going to have a big ensemble or cast that would necessarily qualify for consideration in this category. But it can be a slippery slope for those films in the perception arena if they are winning big everywhere else on the road to Oscar but suddenly get blindsided at SAG and the pundits take note of it, no matter how unfair that might be. Momentum in an Oscar race is everything, and peaking at the right time is key. This notably happened in 2006 when Brokeback Mountain lost the cast award at SAG to upstart Crash. This sent shockwaves into the race, but it was by design on the part of Crash distributor, Lionsgate. Brokeback had been triumphing in all the key precursor races up to that point and was expected to just sweep through all the guild awards. It had already won at DGA and PGA (and later WGA) when it “crashed” so to speak at SAG, losing in every one of the four categories in which it was nominated. But it was the cast award loss to Crash that stung the most.

At the time then-Lionsgate president Tom Ortenberg told me, “it was our strategy to simply stop Brokeback at one of the guild awards, with SAG being most likely because of our strong ensemble cast.” The company blanketed the guild members with DVD screeners, which certainly helped, and the strategy obviously worked. The SAG win was considered a bit of a shocker at the time but might have been responsible for building the momentum needed to do the impossible and overtake Brokeback for best picture. That’s, of course, exactly what happened when stunned presenter Jack Nicholson opened up the envelope and announced Crash as the surprise winner of the Oscar for best picture. Some thought the exact same thing was going to happen a year later when Little Miss Sunshine pulled out a victory winning the SAG cast award over Warner Bros.’ The Departed,but the latter managed to prevail and nab the Oscar anyway.

Is the SAG cast award gaining its own momentum as a precursor of Oscar glory? If the past five years are any indication, it could be, as three of the last five winners have gone on to win best picture, but the uneven correlation between the two groups will probably continue. Time will only tell.